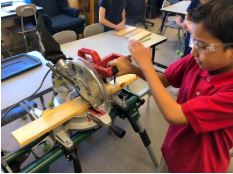 Creating Tools in the STEAM Lab – with the addition of some more “old school” tools of saws, drills, welder, and other essentials, students were able to create, explore,  and show learning in a wider variety of ways. Some projects with the tools from the past year were, bridge building, students designing and building the Chickadee Landing benches, creating a storage bin for recess equipment, designing and creating cribbage boards.

Lego Engineering Classes – This past year was a very exciting one for us in that we have met a long term goal of being able to offer a Lego Engineering or Robotics opportunity at every grade level at our schools.   Students from Kindergarten to 8th grade worked with one of our Lego Curricula to design, build, test, improve, and code a variety of projects. 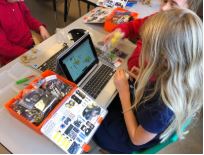 Cool Tech – Each year we work to add to our tech tools for students.  5th Graders in Mr. Johanik’s class built Arduino controlled robot cars.  They had to use screwdrivers and wrenches to build the cars. They then received an introduction in Arduino programming and uploaded programs to the Arduino board that allowed the cars to self drive, follow a line, and avoid obstacles.
We also added a class set of fun Cosmo Bots. These incredibly intelligent bots can recognize faces, play games, and perform tricks. The best part of them is they are fully programmable from basic driving commands all the way up to college level coding. 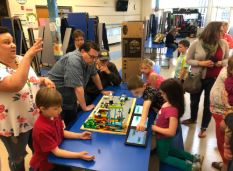 Jr FLL – This year we were able to offer for the first time FIRST’s First Lego League Jr. Program.  JrFLL is geared for students in grades K-2. We had over 50 students participate in this after school program.  This year’s theme was all about humans living on the moon. Students investigated what would be needed in order for people to live there.  They developed a solution to a problem we would face living there, planned, designed, and built a model that shows their solution, and presented their research, plan, design and solution at our end of season EXPO. 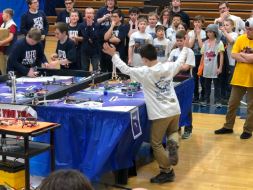 FLL (First Lego League) – Students in grades 3-8 with previous robotics experience had the opportunity to participate on a competitive FLL team in the fall/winter.  Students who were interested in learning more about or getting started with FLL robotics were offered an intramural program in the spring. FLL Teams use EV3 kits to plan, design, build and test robotics that use a variety of motors, sensors, or programming to accomplish tasks.  For competitive FLL teams, a big part of the season is developing a solution to that year’s challenge. Students need to research the problem, brainstorm solutions, and present their solution to a greater audience. North Star teams brought home several awards last year for their programming, design, and teamwork. 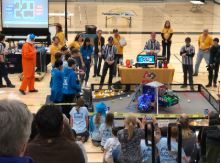 FTC (First Tech Challenge) – This program is for our Jr. Academy students who would like a more intense robotics program.  FTC is a high school level robotics competition that is open to students in grades 7-12. Our North Star team, The Duluth Krakens, had a tremendous season.  They designed and built a robot that could drive forwards, backwards, as well as sideways and diagonally. Part of the challenge is that the robot needed to be able to move materials around the competition space as well as be able to attach to a hook and pull itself up off the ground.  The Krakens missed out on a High School State competition berth by a couple of points. They received an award for their work connecting with local STEM entities. Students could see how what they were doing and learning can be used in future education or careers. 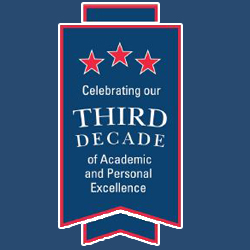